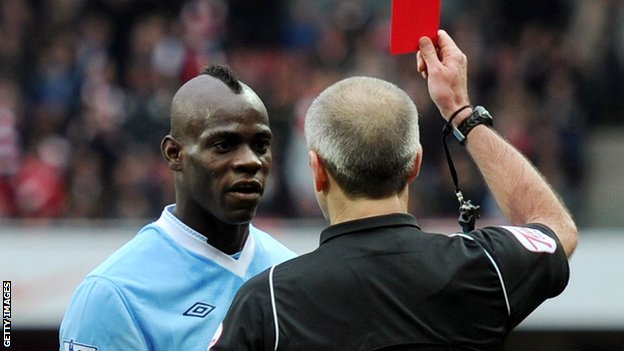 Mario Balotelli takes Manchester City to a tribunal this week. The striker is fighting the club’s decision to fine him two weeks wages for his poor disciplinary record last season. Balotelli was suspended for 11 domestic and European games last season.

Balotelli is expected to appear in person, along with his Italian lawyer and also a representative from the Professional Footballers’ Association. City will bring their legal team.

It’s unusual for a player to bring his club before a tribunal; any grievances are usually sorted out behind closed doors. It’s an indication of how serious the rift is between club and player. Manchester City clearly aren’t happy with Balotelli’s behaviour and Balotelli obviously feels he hasn’t been treated fairly.

Have City and their manager Roberto Mancini finally lost their patience with their wayward star? Balotelli was substituted early in the match against rivals Manchester United and was then left out of the squad that travelled to play Newcastle United at the weekend.

As reported on the BBC Sport website, after the match, City manager Roberto Mancini said: “At this moment, Mario is not in good form and for this reason he is at home. It is only for this reason. To get back into the team he needs to work in training and when he plays, he needs to play well.”

The 22 year old is never far from the news but unfortunately, too often than not, for the wrong reasons. It will be interesting to see if Balotelli is moved on in the January transfer window and if he isn’t, will he still be a City player next season? Time will tell.