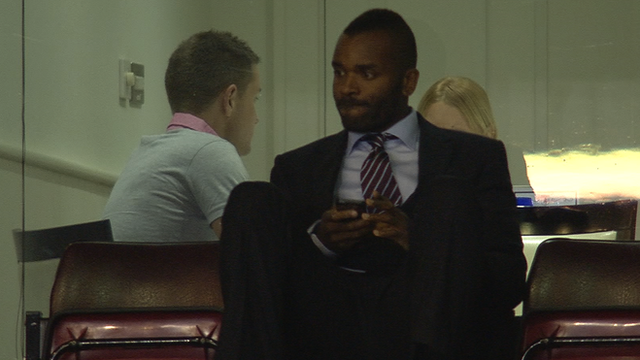 Aston Villa’s record 27 million striker, Darren Bent, wasn’t in the team again last night in the home win against Reading. He wasn’t even on the bench sparking further speculation of a rift with manager Paul Lambert.

The Villa boss is reported to have said he has “no problem whatsoever” with Bent, adding “Darren Bent just has to play well and train well”. “He has a future, everybody has. I’ve got nothing against anybody in the club. I’ve got 25 lads to look after. I don’t have any problem with anybody.” (Source: BBC Sport website)

Despite Lambert’s denial of any problem, it does look strange from the outside. Bent is Villa’s record signing, costing £27 million almost two years ago. He has made nine league appearances so far this season, three as a substitute, scoring two goals. He was left out of the squad last weekend against Arsenal and has only played a small role of late with Lambert preferring Christian Benteke and Gabby Agbonlahor. Benteke has impressed this season and scored the winner last night against Reading.

Fans have been commenting that Bent and Benteke can’t play together, but Lambert stated they can and did; against Southampton, when Villa lost 4-1. Lambert says it’s his job to pick a side he thinks will win and that’s what he’s doing.

For Bent’s part, he may feel undermined and unwanted by a manager that didn’t buy him, but surely he just has to get his head down and do just as Lambert says, “to play well and train well”. No doubt he’s become used to being the main striker and his pride must be dented but it looks to be a matter of attitude and Paul Lambert isn’t going to be won over by any player that doesn’t give 100% for the team.

Perhaps Darren Bent feels he is giving his all and being treated unfairly, we don’t really know. It’s going to be interesting to see how this develops, especially for Villa fans watching their team battling to stay in the Premier League.