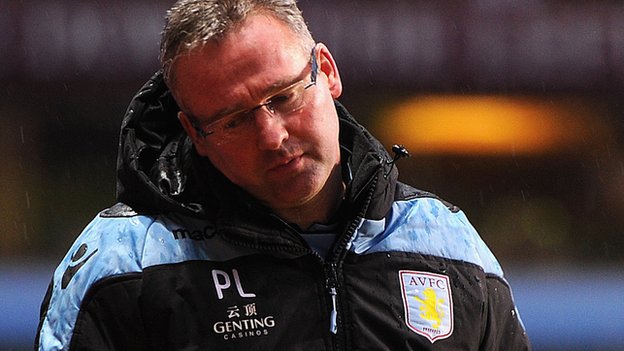 For anyone associated with Aston Villa, this has been a miserable Christmas. Villa have suffered three heavy defeats, conceding 15 goals and scoring none. Despite this, manager Paul Lambert insists they will avoid relegation from the Premier League this season.

As reported on the BBC Sport website Lambert said; “Everyone was positive after the Liverpool win but there is now a negativity after these three defeats. I understand that feeling but I have a belief that Aston Villa will be fine.”

Villa suffered an 8-0 defeat at Chelsea, followed by a 4-0 home loss to Tottenham Hotspur and were beaten 3-0 at home to fellow strugglers Wigan.

Lambert admitted the last three defeats had certainly hurt them and added,”We’ve got a lot of injuries at the minute which certainly doesn’t help, but we know we’re in a fight.

“There are only two ways you can go: run with it and get going or roll over. We’re going to keep fighting.”

The terrible Christmas results have left Villa just one point out of the relegation places and their fans are beginning to lose patience. Many disgruntled fans started to leave the ground when Wigan scored their third goal.

“The fans have gone away as hurt as we are. We have to stick together.

“I’ve been beaten up badly both as a player and as a manager. It happens. It was disappointing to lose to Wigan as it was an opportunity to climb the table.”

With a tough away trip to Swansea on New Year’s Day, Villa will want to stop the rot and avoid another heavy defeat. Lambert will be hoping for the return of some of his injured missing players and will surely need them if Villa are to avoid the drop this season.