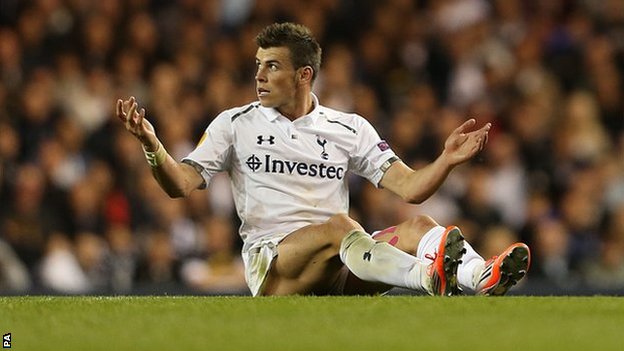 Deserved or not, Spurs’ Gareth Bale has an unenviable but growing reputation as being a ‘diver’. Bale was booked for the second consecutive match for ‘simulation’ in Spurs 3-0 victory over Fulham. However, replays show that there appeared to be some contact between Bale and Fulham’s Steve Sidwell and many have questioned the referee’s decision. There have been suggestions that Bale’s reputation for diving now goes before him and influences the official’s thinking when Bale goes down after a challenge.

The exciting Spurs and Wales winger has received some support in the press from ex-Spurs star, David Ginola. Ginola told BBC Radio Wales, “This debate really annoys me.” “The kid is doing so well. He shouldn’t carry this on his shoulder. I don’t understand why we put pressure on him with false ideas. It’s unfair.”

Ginola went on to say that he thought the officials should set out to protect talented players like Bale rather than punish them. He added that it was hard for a player to shake off the reputation for being a diver once he had been singled out for criticism.

“You don’t need a big tackle to go down,” said Ginola. “A little push would be enough to lose the balance.

“Football is about entertainment. When you have players like that who entertain you week in, week out, you have to protect that. It’s so precious.

“You have to take care of them because they are little diamonds in a league like the English Premier League.

“I thought he was a diamond when I saw him play against Inter Milan and score three goals [in 2010]. He is special.”

Many would agree with Ginola. Players like Bale are so quick and are moving at such a pace that the slightest knock would have them off balance and sprawling to the ground. Sometimes his falls do look a bit theatrical but doesn’t he deserve the benefit of the doubt?

The sight of Gareth Bale in full flight is something all football fans want to see. Surely we don’t want him to adapt his game so he has less chance of being booked if clipped by a defender?

So is Gareth Bale a diver? The jury is still out, but for now, I’d give him the benefit of the doubt and hope the officials do also.