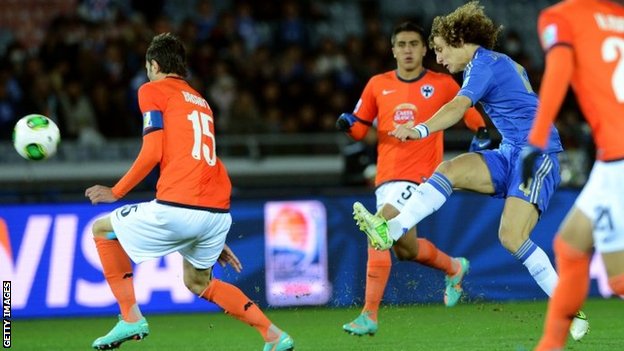 As Chelsea breezed into the Final of the Club World Cup one player in particular received some positive comments after his impressive display. That player is David Luiz, who Gary Neville once said, “He plays like he’s being controlled by a 10 year old on a Playstation.’ Luiz has been frequently criticised for his erratic defending and poor positional play. But that was when he was playing at the heart of the Chelsea defence. New Chelsea manager, Rafa Benitez, moved Luiz into midfield in the Club World Cup game against Monterrey and Luiz excelled in his new role and he played a major part in Chelsea’s 3-1 win.

Many have been of the opinion that Luiz is more suited to a midfield role and if this display is anything to go on, they could be proved right. With long serving Chelsea midfielder Frank Lampard admitting that he could soon be leaving Chelsea, perhaps Luiz could be his replacement.

As reported on the BBC Sport website ex-Chelsea winger Pat Nevin commented that not only is Luiz more suited to a future in a midfield role, but that his passing ability and vision could help bring the best out of £50m striker Fernando Torres.

“Right from the start he looked more comfortable in midfield than he does at centre-half, just as many people suspected he would,” said Nevin.

“It has been slightly disappointing that no one has thought to put him in midfield until now. He was doing all the things you would expect him to do in that position.

“As a deep lying midfielder he can go forward and break from there, he can pass from there and that is what Chelsea have needed.

“People argue about why Fernando Torres has not been doing well. The two sitting midfielders for Chelsea have not been players who stop, get their head up and look for the forward pass for a long time. Luiz does it all the time.

“Rafael Benitez wants his players to get the ball, pass and move forward and Luiz is comfortable doing this.”

One thing’s for sure, his display has provided Rafa Benitez with plenty to think about. What does Luiz himself think?   “If I play in midfield or in defence I don’t mind because I just enjoy playing for Chelsea.”